Three artists, three practices. The denominator is their country, the land, the soil of the land, the soil that houses the past, that gives life to the present and dependent on one’s will to understand it, shapes the future, although a future uncertain having taken yet another blow of devastating and deadly proportions.

Maria Kassab recreates through her photomontages, analog collages and cut-ups, memory based stories about experiencing uprooting at an early age at the time of the civil war inspiring a frequently underlying theme of displacement and seperation, of her returning to Lebanon at the age of sixteen, to what life had become, life in a war zone - one series is called “Home Is Fiction”. Using the various above mentioned techniques, Maria Kassab creates works representative of her personal memory adding to it observations of the now through her own photographs, while at the same time adopting the memory of others through found photographs. By melting together her and their time of living, Kassab creates a connection between past and present often in a superimposing of images, that in the nature of the collage seek into a moderation through intervention, which by added non-related material takes her works into another realm through which runs a vein of surreel poetic sense. Maria Kassab rearranges the world which she desires to express, mediate and actualise sooner than making a world from scratch to reflect her own desires. Titles like ‘Home is Fiction’, ‘Of Places and Cannons’,’Of Blasts and Illusions’ at this moment tragically lean against a story shared by all of the three artists. Kassab consciously lets her work become political, relating to Lebanon and it’s through too many years escalating crises, thus in tracking the story of her country through her images, they in an eerie sense come together as comments on the time now.

Out of another crisis, the pandemic, came a return to former practice during confinement namely that of painting. With a need to see colours and create fictional perspectives thereto added a strong sense of humour spurred by ennui, Maria Kassab created the recent series of paintings on paper “Of Colors & Isolation” depicting herself in various invented settings as a way to keep herself sane. Even in this small format she is convincingly masterful of her chosen medium and sense of referential details and ability to guide the onlooker, as in the work “Portraits” depicting the interior of a room which one notices first and then in the background, empty frames on the wall….

To read the paintings of Sara Chaar is like jumping head on into a rumbling stream of consciousness that takes you to places you’ve never been, inhabited by insect-like creatures you’ve never seen. There is an absolute defiance of compository rules in her works and uncompromising as they are, no absolute decoding them. The process of Chaar’s work is a constant constructing, deconstructing, reconstructing as if echoing the seemingly never-ending  story of her country. If letting go and let oneself be led by the stream one might catch glimpses through the sparse often sombre color range, of broken up references to the soil of the land, to a sense of belonging moulded by memory and cultivated by time, it punctuated by stings from charcoal, pencil or oilbar.

Using her instincts as a mediator for transferring her impulses and feelings directly unto the canvas, Chaar’s physical movements can be traced through long uninterrupted lines and energetic almost manic scribbling that awakens these long limbed insect-like figures or forms which point back to her early works on paper, imbedded in between the layers on the canvas calling them out from the soil of her material. The canvas though seems only a practical necessity, like a fixed point, her solid ground from where to face the world. Using unconventional tools like those of a mason, Sara Chaar builds up layers upon layers of oil and acrylic as well as glass paint, plaster, charcoal and bees’ wax. Restlessly experimenting with the material she scratches through the layers using screwdrivers, cutters and palette knives instinctively forcing out transformations and translations of her daily encounters with sounds and sights.

Sara Chaar’s in her abstract works does not search for beauty, although it’s there in some strange form that can best be described as rough, unyielding and utterly physical through the concentrated outbursts of energy with which she attacks her material, that bearing witness to the process leaves her works exceptionally strong, but by nature fragile - just like the human mind.

The very reason for returning to the expression ‘the soil’  being, that we are all connected, all in a lineage combined from primordial time through ancient cultures and into the present where we regard the world surrounding us from various positions but it all is, we are all, connected by the earth, the soil and mycelium, by nature, the mother, lifegiver, provider and keeper.

In a performative art piece by Mirella Salamé, in ‘RADICAL’  at the French Institute in Beirut, Lebanon (2017), she is buried in earth from which grows seedlings and flowers, occasionally watered by the audience: a performance that provides an opening to understand her mind, work, and most importantly process.

Her works are collaborations with the earth itself, committing to and acknowledging her belonging to Nature (rather than to the system), from which comes this strong sense of awareness that is distilled into the depth of her art work, letting feelings and ideas find and include her until she intuitively retrieves and releases them from within her. Reclaimed wood, paper, earth pigments, seeds, plants, and her own body, together with reclaimed immaterial such as herstory (rather than history), time and memory are the artist's materials.

Many of her works are ephemeral, others on found or recycled material such as paper that is either homemade or found, on which she paints with pigments she digs out of the earth with her bare hands, on one hand questioning the material of artwork today, and getting in touch with it on the other, as her artwork starts from scratch, from life, not from the market. With the earth being the keeper and provider, Salamé patiently and instinctively searches in nature to become acquainted with what she might find of pigments, then through a long meditative procedure, she grinds them to powder, sifts and levitates them, leaves them to dry under the sun, then mixes them with acacia tree resin and rain water, a process in which all natural elements become an integral part of her ever on-going series Earth pieces, with a subtitle for each, such as ‘earth, earth, earth, her blood, our blood’.

These Earth pieces constitute the core of her work and artistic process in the most purified form, painted with her hands (not brushes) in intuitive and impulsive motion. The constant repetition makes of this work a ritualistic invocation of the soul of the earth through its own flesh and color. With this highly contemporary approach to Art in regard to our times, Mirella Salamé questions our belonging and brings to our attention the need to return to values we share and are inevitably connected through, as she lets the form make the connection to the unspoken and the unseen. 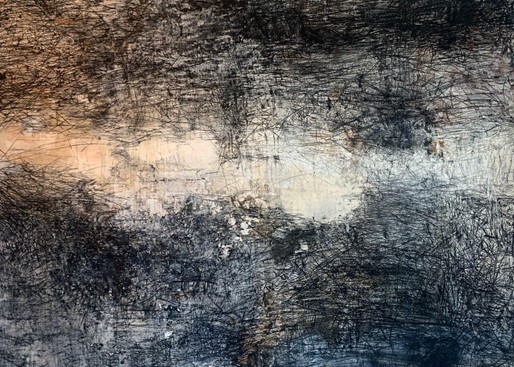 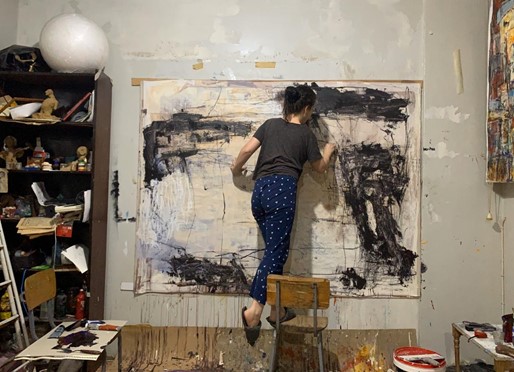 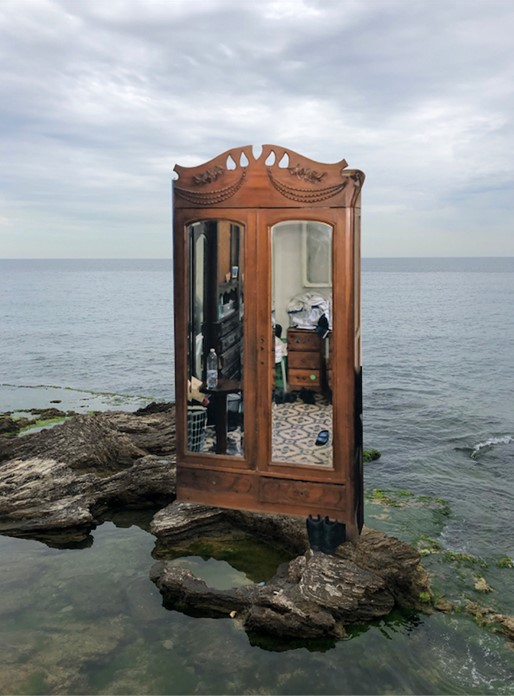 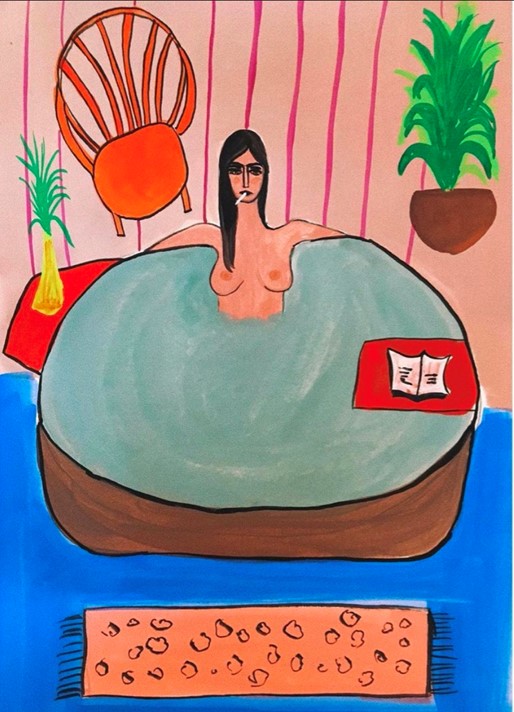 Mirella Salamé in front of her work Earth Piece, 2017