We are but a mere deviant species, a selfmade abnormality within our family of animals. We may have developed some extraordinary abilities and refined skills, but not such that can secure our survival as a species, rather lead to our self-destruction, extermination. We may be able to ponder upon our existence and purpose, being nothing but a procrastination in the course of fulfilling it, having become an abstraction like the gods and prophets whom we ourselves have manufactured as a means for hope and salvation, while suffering from a loss of memory of our true origin and belonging. Having made ourselves dependant on our own non-existent means of survival, we are neither able to fulfill our existence nor understand it, as we have perceived nature, our world, the earth, only partly. As long as we only understand partly, we do not comprehend or see the oneness of all, thus we have made ourselves strangers, without a home, in our only home, this earth.

That puts in focus the importance of an art form which defies the mainstream categorisations, but to satisfy our human need of labeling, could be referred to as earth art, ecological art, or eco- feminist art. A movement of utmost importance in contemporary art, politically, spiritually, and ecologically: One to circumvent from and defy the highly capitalized/patriarchal art business. An artform, that not only centers around ephemeral or natural artworks as a personal choice in the making of it, but one that collaborates with the wisdom and information of the earth and the natural world, from which emanates primordial power. An act of rememberence and belonging, bringing that to the surface to serve our fellow species; for us to remember, feel, and perhaps to change the direction in which our sick world is heading, further into disconnection from and harm towards the earth. The red umbelical chord between humans and mother earth has been cut by the system, Mirella Salamé traces it back.

Ancestral practice, ritual, incantation, earth medicine, alchemy, divinity and remembrance, are all elements of the artistic practice of Mirella Salamé. They connect in a way that taps into, or recalls, within each of us, the basis of our existence. Her works are a celebration of nature, of the earth as the divine mother, as such all her works are entirely natural, made with/in collaboration with the earth, and natural material, rather than store-bought ones. A choice that the artist presents boldly. The Lebanese female artist is marking the art world today with a color that has become her signature: the red ochre. The most ancient color used as paint (which can still be witnessed today in prehistoric cave paintings,) the red ochre earth pigment is a primordial color dating back to 200,000 years. Mirella Salamé brings it back today, after the suppression, abuse, and disconnection from mother earth, in a powerful remembrance and celebration. A color of the earth’s womb, the color of origin, of our own origin, rich in iron, similar to womb blood. Mirella Salamé notably communed with red ochre to make her series the earth pieces, her body imprints, and now in her protection pieces, and in her performance piece, red. A color that reflects power, fertility, blessing, boundary, and the primordial goddess earth.

Working with the red ochre, in all the works currently presented in her exhibition ”RED”, at galleri Tom Christoffersen, in Copenhagen, Mirella Salamé explores the interconnectedness between her own body and that of the earth, resulting into a direct dialogue in a series of body imprints, of which one is exhibited, where she herself becomes the mediator between earth and spectator, in a direct addressing where she brings to the surface parallel issues of suppression and exploitation between the earth and women. Moreover, in her performance art piece ”red”, where she extracts the red ochre earth pigment from her own womb, blesses herself with it, and makes a big circle of protection around her woman body with it, connecting the work with her ”protection pieces”. With the red earth pigment, Mirella Salamé manifests an interconnectedness with mother earth, and simultaneously a reclamation of her/the female body, taking it back from a patriarchal world built around suppressive power, extraction and abuse (of the earth as well), to her own power, and to the earth’s.

The impressive central work “protection pieces” consisting of 44 individual artworks, draws a line to her earlier works, summing up her practice thematically as a repetitive summoning of earth remembrance. Dug out from the earth’s rocks depth by the artist herself in reciprocity and reverence, and processed manually & ritualistically into paint, with red ochre earth pigment, tree resin, river water, soil, air, sun, time, four directions, the protection pieces contain all elements, as well as the protection incantation of the four directions, emanating the divinity and power of earth energy, and are offered to adorn and bless homes and altars. 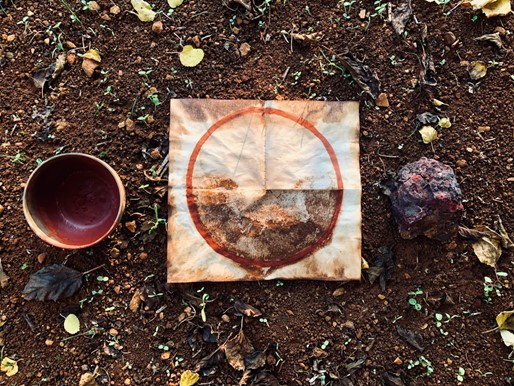 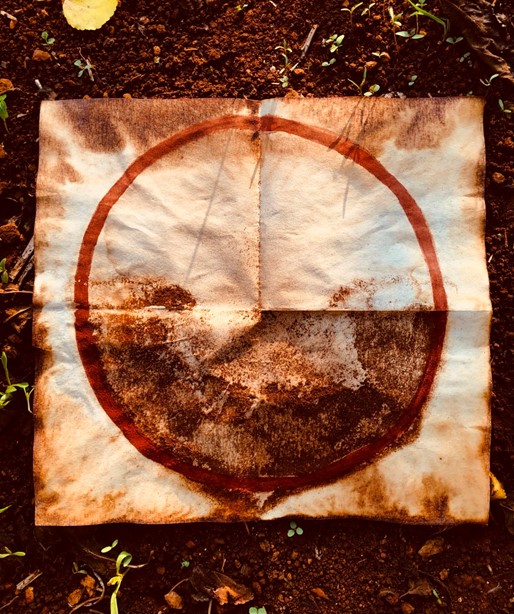 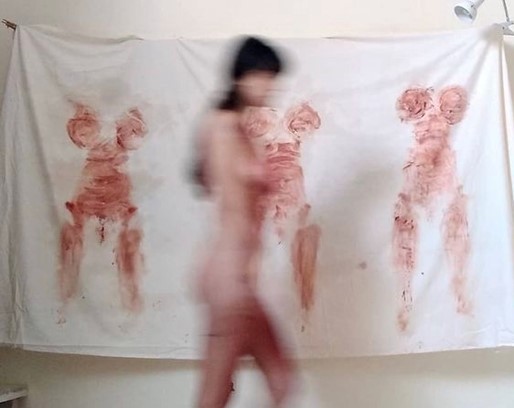